Want to host amazing and imaginative events like Apple? Each of these 10 corporate event ideas listed in the article will teach you how.

Apple (makers of the iPhone, iPad, Macbook and countless other stylish gadgets) is one of the most recognizable and successful brands in the world. The company that the two Steves (Jobs and Wozniak) founded in a garage in the Bay Area in 1976, has since grown into a massive, ground-breaking organization.

Apple’s event marketing team also plays host to a few famous gatherings, including the highly anticipated annual WWDC conference (mentioned below). What is it that makes these events so revolutionary? Why do attendees religiously block out time in their schedules and spend their hard earned money on tickets to Apple get-togethers?

That's what we'll explore in this article. Keep reading to discover some of Apple's greatest b2c and b2b event marketing secrets and how to apply them to your own events.

In this first section, we'll look at Apple's flagship events. These are (or were) some of the tech company's largest annual gatherings and there's a lot of event knowledge to be gleaned by studying the best examples of Apple’s corporate event management. Let's dive in!

But WWDC isn't all work and no play. Attendees also had access to exercise classes, live music, a killer afterparty, and a front row seat to Apple's announcements of new products.

Key Takeaway: WWDC has a little bit of everything for everybody. Apple goes all out and gives its audience exactly what they're looking for. Your company should do the same. If you're able to, consider planning a mega-bash that's fun, value-packed, and memorable. Your attendees will thank you for it!

Apple hosts a few special events each year that are basically big press conferences dedicated to the announcement of new Apple products and/or upgraded offerings. At a special event in October 2018, the tech giant announced its plans to release better versions of a few of its flagship products: the iPad, Macbook Air, and Mac Mini.

For Apple fan boys and girls, these special events are highly entertaining and the brand does a great job of building anticipation for them. How? They don't publicize what will be announced at each special event before it happens, leaving the world to wonder what "next big thing" Apple has up its sleeve.

Key Takeaway: There are two lessons to learn from Apple special events. First, build excitement for your conference or expo. You can do this like Apple does by adding a bit of mystery to your event. For example, you can book a "secret speaker" who won't be announced until your conference is under way.

And two, use the platform your event affords your company to share details about new products or product updates. Take advantage of your captive audience and get them excited about what your company offers. Then give them the chance to purchase it!

MacWorld/iWorld was an annual trade show with conference tracks dedicated to the Mac platform. It ran from 1987 to 2014 but, contrary to popular belief, it wasn't technically an Apple event. Instead, the trade show was hosted by IDG World Expo. But Apple was highly involved and Steve Jobs often gave keynote speeches.

Attendees to MacWorld/iWorld were able to learn from some of the greatest minds in tech while exploring the expo, which featured hundreds of vendors selling the latest and greatest products specifically made for Mac computers.

Key Takeaway: Event planning is a large undertaking. There are so many details to iron out and expenses can quickly get out of hand if you're not careful. Does this mean your company is better off not hosting conferences? Absolutely not! It just means that you may want to consider partnering with another company like Apple did for MacWorld/iWorld. This will allow you and your team to share both the logistical and financial burdens of event planning with a partner.

Apple Expo first came to life in 1984 and was hosted by the French Apple distributor, Seedrin Sarl. It was often seen as the European equivalent of MacWorld/iWorld and for the next 16 years, the event carried on in the same way that it was founded. But in 2000, Apple Inc. officially took control of the conference.

Apple began using the event to announce new products. For example, at the turn of the century, Apple announced a series of new iBooks and, in 2004, the iMac G5 was announced for the first time. But in 2008, Apple pulled the plug on the conference and publicized its intention to participate in less trade shows every year.

Key Takeaway: The Apple Expo is a great example of a company going where its audience is. Apple had become a worldwide brand, and while people from many countries around the world would have loved to attend Apple events, many were unable to due to travel restrictions. So what did Apple do? It started putting on events in Paris, giving its horde of European fans the chance to participate.

Consider adjusting your event strategy to do the same. Does your company have an audience in other cities, states, or countries? Bring your event branding to them and host events where your audience already is. This will give your company the opportunity to connect with more people. 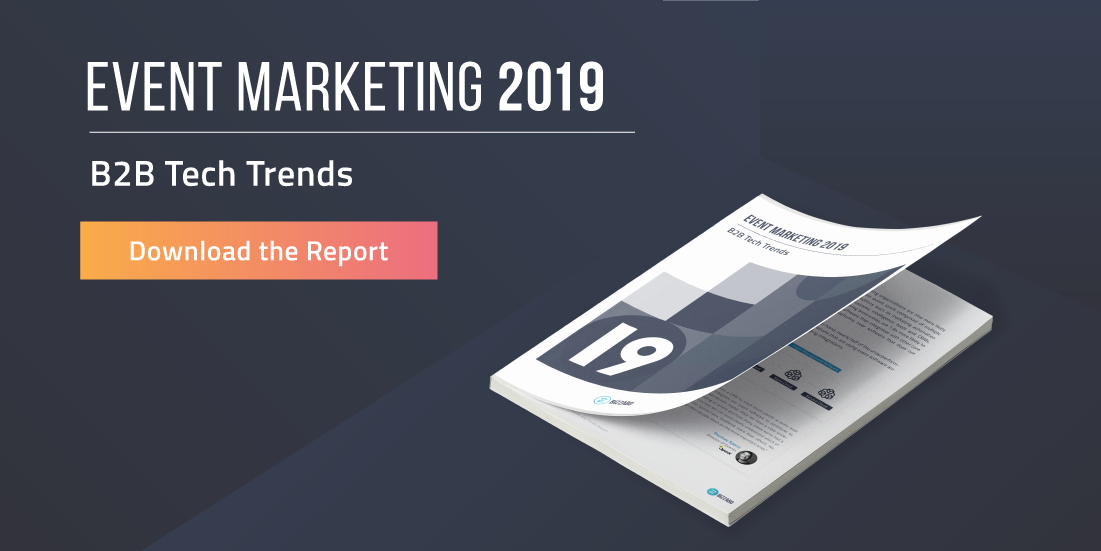 Apple also hosts "Today at Apple" events which are basically in-store trainings that teach Apple users how to use its products. All of these events are free and focus on things like photography, coding, and health and fitness. Let's take a quick look at each of these interesting event types.

What's a photo walk? Exactly what it sounds like: participants go on an Apple employee guided walk around the neighborhood and learn how to take better pictures with their iPhones. Each walk has a specific theme. For example, "Capturing Light and Shadow" is a training that teaches walkers lighting techniques to improve the quality of their photos.

It's worth noting that participants don't even have to bring their own devices to participate. iPhones and iPads can be provided if need be, which means a photo walk is also a great opportunity for potential customers to try Apple products and (hopefully!) catch the "bug".

A Video Lab is an hour and a half long training session that dives into advanced video making techniques such as how to create videos with the "illusion of teleporting, disappearing, and other visual tricks."

These classes are specifically designed for those with a foundational knowledge of video creation, though anyone can participate. And the latest iPhones are available for use, free of charge. Again, by making its tech available to students, Apple is able to showcase its products in a very tangible way and potentially increase sales.

Do you think your little one might be the next Steve Jobs? Then you may want to bring them to one of Apple's Coding Lab for Kids sessions, a coding workshop aimed at children between the ages of six and twelve who already have a basic knowledge of coding.

By hosting events for kids, Apple is attempting to raise up the next generation of Apple fan boys and girls. It's easy to forget that the future of today's top companies will eventually be determined by tomorrow's adults, AKA children.

Recently, Apple has made strides to enter new markets. This is extremely apparent when attending a Health and Fitness Skills training at a local Apple store. At the event, attendees learn how to use the health app on their iPhones which tracks four key areas: activity, mindfulness, nutrition, and sleep. Through the Apple app, users can view their health data in one convenient place and track their progress towards their health goals.

Apple's Skills classes are aimed at beginners and are a great opportunity for the tech company to turn new customers in life long fans.

Key Takeaway: So what can we learn from these Today at Apple events? Mostly the importance of educating your audience — especially when it comes to the benefits and use of your company's products. Make sure that your events include training sessions. This will allow your team to showcase convenient and/or little known features while also deepening the bond you have with current (and potential) customers.

Finally, Apple also hosts (or participates in) other events that don't necessarily fit into their own categories. We're talking specifically about Apple's numerous hiring events and the company's involvement in CES 2019. Let's take a look:

Even the hiring process at Apple is turned into an event, proving that events can (and should) be an integral part of your company's business and event strategy. Here's how Apple handles recruitment:

This "Hiring Event" tactic is brilliant! It makes the recruitment process fun and builds excitement in potential employees. Since many of Apple's jobs require customer service skills, it also gives the Apple hiring team a chance to see how each candidate fares in a public setting.

Key Takeaway: Why not add a recruitment element to your events? It will give your company access to top talent without having to expend as much effort to find it. You may even discover that it boosts attendance numbers. Folks who were on the fence about attending may decide to pull the trigger when they learn that they have the opportunity to secure a new job.

Here's the thing: CES is not an Apple event. In fact, in 2019 (the specific year we want to talk about) Apple didn't even officially attend or participate in the festivities. At least not directly. Instead, the iPhone makers used the event as a marketing tool.

Apple put up a giant sign (shown above) near the Las Vegas Convention Center (where CES was held in 2019) to emphasize its commitment to user privacy, a hot topic in the tech world.

Key Takeaway: What can we learn from Apple's CES exploits? The importance of making a splash and doing something bold and unique. What that means for your company will completely depend on your brand, audience, and resources. But don't be afraid to do something a little "out there" to gain attention.

Wrapping Up: Main Takeaways from Apple

Apple takes a different approach to events than most of its contemporaries. They don't host an endless stream of conferences. They don’t participate in many of the world's largest trade shows. Instead, Apple focuses all of its attention on a few annual flagship events, some helpful in-store training initiatives, and the occasional expo appearance.

Here are the main things you can learn from Apple and apply to your own events:

Did you enjoy reading this article? Then you might also like our posts on events from Amazon, Atlassian, and Adobe.

COVID-19 has changed the way we interact with colleagues. Learn 10 impactful ways to bond with your team while maintaining social distancing best practices.

Looking for digital gift ideas to give your virtual conference attendees, speakers, sponsors, and partners? Here are 19 creative and high-impact ideas you can use today.

12 Imaginative Events and Activations from Rakuten

Learn how to host diverse gatherings from Japanese business leader, Rakuten, with real examples from the brand.